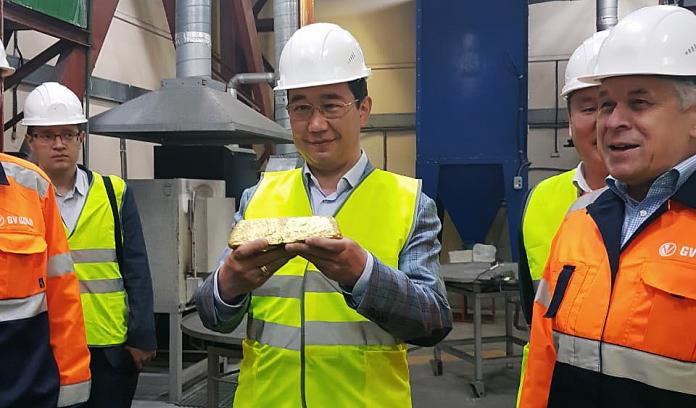 On August 12, 2018, a working visit of the Acting Head of the Republic of Sakha (Yakutia) Aysen S. Nikolayev to the Oimyakon Area took place. Within the framework of this visit, he inspected the Taryn Mine — one of the key mining enterprises of the region.

In the course of the visit, Mr. Nikolayev met the management of the mine, took a tour around the mine site, inspected the mill. The guests were acquainted with the key stages of the production process of the enterprise, from feeding of the ore to the grinding circuit to production of the commodity — the Dore alloy and the gravity and flotation concentrate. The guests also visited the mine camp with the administrative office and the staff dormitory, and estimated the quality and comfort of the staff’s living conditions and development of the adjacent infrastructure.

The Taryn Mine is a new leader among the Company’s operating assets and the largest gold mining enterprise in the Oimyakon Area of the Republic of Sakha (Yakutia). The enterprise was launched in the autumn of 2017 and in the record breaking time attained its design parameters. Since that time, it has been demonstrating persistently high operational results: 29 koz in h1 2018, 42 koz in 2017. Today the Taryn Mine represents a complex of production facilities form the open pit, the mill, the mine camp to the number of auxiliary facilities. The mine’s staff totals 500 specialists of different professions.

“The shareholders and the management of GV Gold are grateful for the assistance in the Taryn Mine development rendered by the state authorities on the regional and the federal levels and by the Ministry of Development of the Far East. In the future, we are planning to expand the production capacities of the enterprise and create additional workplaces. Further development of the region’s infrastructure is very important for us”, — said Sergey M. Karabutov, Deputy CEO for GR.

In the evening, the delegation returned to the settlement of Ust-Nera, where in the meeting room of the municipal entity’s administration, a meeting of the Acting Head of the Republic of Sakha (Yakutia) Aysen S. Nikolayev with the heads of the gold mining enterprises took place. At the meeting, in the round table format, the participants discussed the issues with floods and road communication in the region, and the power supply of the settlements and mining enterprises.

GV Gold (Vysochaishy, PJSC) is one of largest and fastest growing Russian gold mining companies. It develops open pit deposits and washes gold at the country’s largest alluvial deposit. In 2017, the Company produced 225 koz of gold, becoming the 7th largest gold miner in Russia. In 2018, the Company expects to produce

Its key operating assets are located in the Irkutsk Region and the Republic of Sakha (Yakutia). The Company operates four mines with a total capacity of 8 mtpa of ore and holds 20 mining and exploration licenses. GV Gold boasts an extensive resource base, with JORC reserves and resources estimated at 4.4 moz and 7.0 moz, respectively.