GV Gold comissions a mine in the Republic of Sakha (Yakutia) 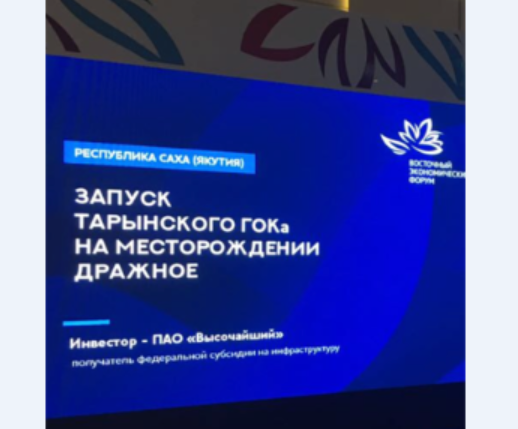 Within the framework of the Eastern Economic Forum VEF-2017 featuring the President of the Russian Federation Vladimir Putin, an official ceremony of the Taryn Mine commissioning took place. On the part of GV Gold, the event featured the founding shareholders — Chairman of the Board of Directors Sergey Dokuchaev and member of the Board of Directors Natalia Opaleva. GV Gold Taryn business unit (TGMC, JSC) CEO Alexander Tuluptsov, who at the moment of the launch was at the processing plant of the Mine, took part in the event in the format of a teleconference bridge.

A license for the Drazhnoye deposit was acquired by GV Gold (Vysochaishy, PJSC) at the end of 2012 as the result of its victory in the tender. The asset is located in a remote region within the territory of the Oimyakon Area of the Republic of Sakha (Yakutia) — the Pole of Cold. Taryn business unit of GV Gold — Joint Stock Company “Taryn Gold Mining Company” (TGMC, JSC), is the operator of the project.

Productive capacity of Stage 1 of the plant is 700 kt of ore p.a. After the plant attains its full capacity, the annual gold production will total 2.7 t (87 koz) of gold. Within the framework of the project implementation, the Company has obtained a state subsidy for construction of the infrastructural facilities.

After the Taryn Mine processing plant attains its full capacity, the annual tax payments to all levels of the budget of the Russian Federation will total RUB 500 million, 450 additional jobs will be created, financing of the region’s social programs will be expanded.

Chairman of the Board of Directors Sergey Dokuchaev:

“In just two years, in severe climatic conditions, the Company has built the largest mining enterprise in the Oimyakon province — the Taryn Mine. I’d like to express my sincere gratitude to the team of TGMC and GV Gold for its high professionalism and successful implementation of the project!

Commissioning of the enterprise has expanded the Group’s productive capacities to 8 Mt of ore p.a. We are not going to rest on our laurels: next thing on the agenda is a commissioning of the Ugakhan Mine in the Irkutsk Region and development of the new projects. By 2020, we are planning to ramp up the annual gold production to 10 t (320 koz) of gold.”

GV Gold (Vysochaishy, PJSC) is an actively developing group of companies with high production efficiency level. It ranks in the Russia’s TOP 10 gold mining companies list. The Company operates in the Irkutsk Region and the Republic of Sakha (Yakutia), where its Irkutsk, Taryn and Aldan business units are located and large scale exploration operations are carried out.